Maidenhead parkrun: the one with the Olympian and unexpected media presence!

When my friend Sarah invited me and another friend Jo to go on a wine tasting tour of an English vineyard near to her home in Maidenhead last Saturday, my first thought was: “Can I still do parkrun?” Before I started running parkrun, Saturday mornings would invariably involve a lie-in and the chance to nurse my hangover from the Friday night, but now Saturdays have been re-named parkrunday and I hate the thought of missing my regular parkrun fix even to do something interesting! I wasn’t sure I had time to do my home parkrun of Walthamstow in East London and get home, showered and over to Maidenhead in time for the tour, which took place in the early afternoon.

But Sarah had the answer – arrive on the Friday night and stay over; then we could all go to Maidenhead parkrun in the morning; Jo and I to run and Sarah to volunteer. An added bonus would be that I would get an “M” for my alphabet challenge, and my 11th different parkrun so another notch towards my 20 parkrun cow cowl! (If this means nothing to you, read my previous blog post on parkrun tourism to find out!)

Saturday morning came around and we set off for Maidenhead parkrun which takes place in Braywick park. Fortunately with a local with us, we had no issues about finding out where to go/park etc., parking in the nearby Stafferton Lodge Toby Carvery where we were able to use the loos before the run.  Sarah went to get her hi-viz jacket and to receive her volunteers’ briefing, whilst Jo and I wandered around and chatted to the gathering parkrunners, including the friendly St John who turned out to be on the Maidenhead core team and was a mine of information, including the advice that if we showed our parkrun barcodes at the Toby Carvery afterwards when ordering breakfast they would give you free tea or coffee – bonus! #DFYB 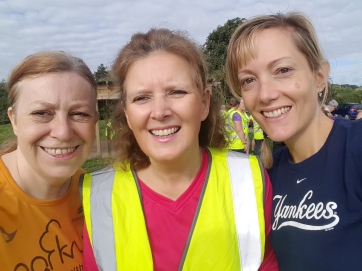 As we chatted, we noticed that there seemed to be a reporter with a microphone talking to the event director – and then she thrust the microphone into Sarah’s face to ask her a question about volunteering for parkrun. It turned out that she was a reporter for Radio Berkshire, for the Andrew Peach show. They do a thing called Peach Quest which is a bit like the TV programme Treasure Hunt with Anneka Rice (yes, I’m aware that dates me!) where the reporter gathers clues to different destinations. It had been planned that the event director, Adam, would have the clue for her next destination which he read out live on air – all good publicity for parkrun.

We then noticed that Radio Berkshire wasn’t the only media interest there that morning; there also seemed to be a lot of photographers and cameras around. Jo then spotted a familiar face who seemed to be getting a lot of media attention – none other than the UK’s most decorated female Olympian, Dame Katherine Grainger. She was there to promote a new initiative by parkrun and UK Sport, funded by the National Lottery, called #teamparkrun. On 19th August, a number of Team GB athletes will be taking part in parkrun at events across the country, not to run it but to bring up the rear and volunteer as tail walker.  Dame Katherine was launching this initiative by volunteering as tail walker at Maidenhead, her first ever parkrun. She was absolutely lovely, posing for photos with lots of people before donning her hi-viz and listening to the new-comers briefing which explained the route and other information about the run. I wonder which parkruns are going to get a teamparkrun athlete, and if we’ll get one at Walthamstow? I guess I’ll have to go along on the 19th to find out! 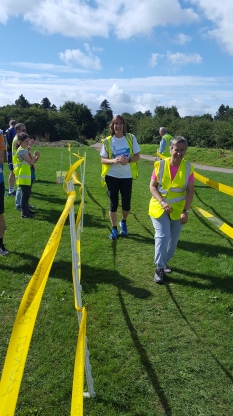 And then, a little late but forgivable with all the media excitement, we were off! The route is a two-lap course around a nature reserve, mostly flat but with one steep but mercifully short hill which has to be tackled twice. There had been quite a lot of rain in the days before, resulting in lots of brambles and nettles along the route which made me regret my choice of running shorts over leggings, and the path was quite narrow at the beginning resulting in a fair bit of bunching up at the start. But the runners soon stretched out and I found myself with plenty of room on the long straight first leg of the lap – one of the advantages of being a slow runner! As I neared the end of that long straight I fell in running next to Katy, who shouted out a cheery ‘hello’ to Malcolm who was standing at the end of the straight holding a sign that said “Malcolm’s corner”! Katy told me that Malcolm was a bit of a legend at Maidstone parkrun; he was a veteran fast runner who had volunteered at nearly every single parkrun since its inception, and she thought that the one that he had missed was because he was volunteering somewhere else! I ran alongside Katy for a bit and we chatted about running and parkrun – she belonged to a group of women called the Running Sisters who were non-competitive but supportive of each other – sounded great! 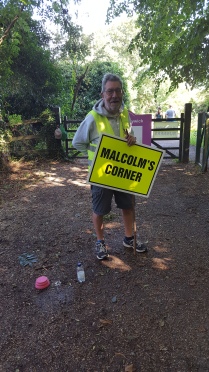 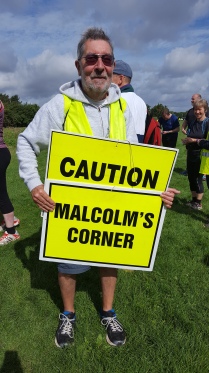 I was trying out a new Garmin and found myself struggling a bit between what I thought was the distance between 2-3k, so was suddenly surprised to find myself approaching the steep hill for the second time, to be cheered on by the marshal at the top of the hill encouraging us up the hill and saying that the finish was just around the corner. It was only later that I realised that my Garmin was set to miles not kilometres!

And before I knew it the finish line approached, and I met up with Jo who was waiting for me, and re-met Katy who then introduced me to one of her running sisters who was running her first parkrun only 6 weeks after having a suspected heart attack. With such a spirited run, she was encouraged to ring the parkrun bell which was waiting by the finish line. Dame Katherine was also encouraged to ring it when she finished her first parkrun before all the volunteers posed for a final photo.

This was my 10th run as a parkrun tourist, and each parkrun is different with its own positives and negatives. There were so many positives at Maidenhead that I haven’t mentioned, like the smiley young barcode scanner and the child with his own space-themes hi-viz, that all added up to make me feel welcome and part of the parkrun family. Spirit of parkrun: Maidenhead has it in bucketloads! 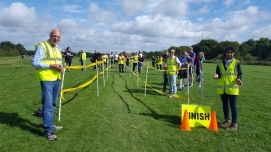 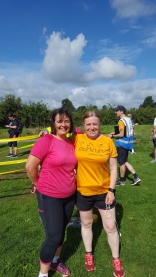 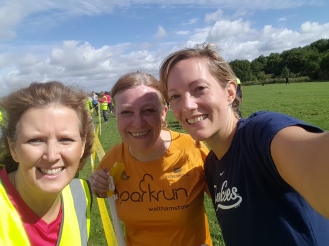 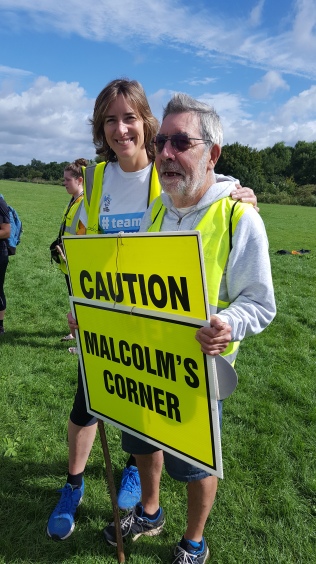