Lundy. For many people the word is merely one in a list of places mentioned in the shipping forecast, perhaps in drowsiness as they drift off to sleep with Radio 4 on in the background. But for some, myself included, Lundy is a place to go for holidays; a haven of peace and tranquillity, wildlife, daytime walks followed by socialising, food and drink in the Marisco Tavern, the only pub on the island. Having first visited only 5 years ago, I fell in love with the island on my first visit and have returned many times since and it holds a very special place in my heart. Back in January 2016 I wrote about a peculiar pastime that takes place on the island: Lundy Letterboxing 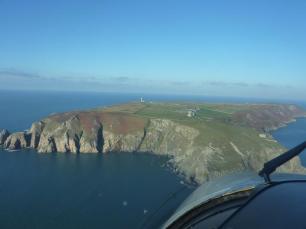 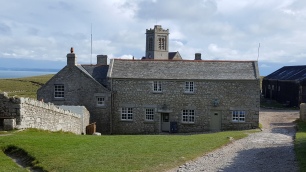 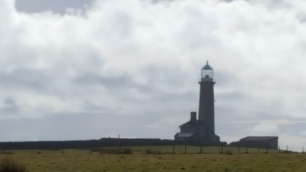 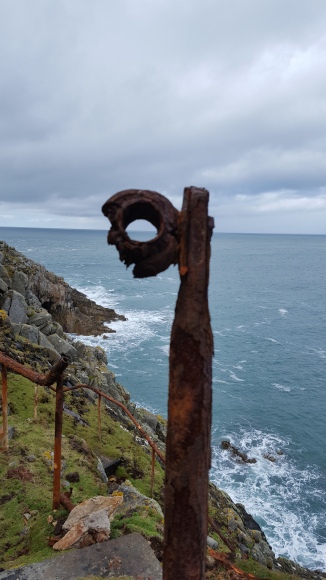 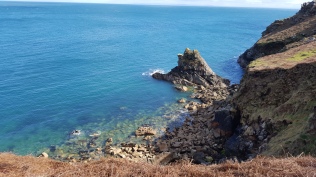 Although I have returned to the island on many occasions, I have never run on the island, or indeed even thought of running on the island until recently. When I took up running as a hobby it was very reluctantly, and I thought of it as a boring necessity to get fit and try to put a halt to my expanding waistline. I certainly wouldn’t have dreamed of going for a run on holiday – I was on holiday to relax and have fun, not put myself through the hell of going for a run! Although my attitude to running has changed over the last few years, and now I – dare I say it – do find myself actually enjoying running and miss it when I don’t manage to get out for a run, it is still not something I would readily consider doing on holiday.

I was aware, however, that other people did not have this attitude and did run on the island. Having visited for New Year a few times, I was aware of one fellow visitor who would change into running gear almost as soon as he stepped out of the helicopter that provides the winter service to the island, and go off for a run. In conversation with him later in the pub he said that it has become a bit of a tradition with him; he runs from the village up to the North Light, then back down to the jetty before returning to the village. He records his time in a log-book for runners that lives in the Tavern, and tries to beat the times of other people who record their runs in this book.

So when I visited this New Year, I was intrigued to hear from the Assistant Warden, Sian Scott, that on Sunday 8th July the island is going to be the venue for the inaugural “Lundy Race”, a 14-mile(ish) trail race that loops around the entire island. I was slightly amazed that you could devise a 14 mile run on an island that is only 3 miles long and just over half a mile wide, but looking at the proposed route I could see the distance was gained by the route looping around and using the coastal trails on the west and east sides of the island. This sounded like a fantastic opportunity to combine my new-found hobby of running with my favourite island, so on my return to the mainland I immediately looked up the race to see if I could enter. I had never run further than 10k, so I realised it would be a challenge, but I thought if I trained for it I might be able to achieve it. The race is run by a trail running company called Puretrail UK, and I could see that they had chartered the island supply boat, the MS Oldenburg, to take race participants to the island and back. The Oldenburg usually only travels to the island on 3 days a week (4 in summer months) and not on Sundays, so this special crossing on a Sunday is especially for the runners participating in the race. However, in January it was already fully sold-out, and the website stated that the only way to participate was to go on one of the scheduled crossings and stay on the island in one of the 23 self-catering properties. But on checking this, all 23 properties were booked, so the only possible option if I was to compete in this race would be to go on the scheduled sailing on the Saturday and camp until the next scheduled sailing back on Tuesday. Weighing it up, I thought that it would be a hard enough challenge as it was to run the race, but not having a nice comfy bed to collapse into that night made it seem too much of a challenge for me so I decided to give it a miss this year.

In March, on the spur of the moment, I booked a short stay on the island for some much needed rest and relaxation. As I was training for the London 10 Miles race taking place in May and was trying to increase the length of my runs, I was conscious that it would not be a good idea to have a 6-day break from my training schedule, and so I packed my running kit and decided to try to go for a couple of runs on Lundy. After recovering from a fairly awful crossing on the MS Oldenburg, as soon as I had booked into my property (The Old School) I changed into my kit and set off for a run. I had planned to just run up the path that runs along the centre of the island which I had remembered from previous visits as being flat and fairly featureless – I call it the A1! I pretty soon discovered that it is NOT flat; not at all! And I also discovered that running on Lundy is a lot harder than I had envisaged. For a start, it’s made of granite. I hadn’t realise what a difference this makes to the effort required for running; the ground is very hard underfoot and there are also lots of small, hard, loose stones that make trip hazards and certainly not the springy surface I am used to running on. Also the island has pretty extreme weather; often there is a ‘hoolie’ blowing that makes it difficult to stand up, let alone run, and when I was running although it wasn’t hoolie weather, it was certainly hard going running against the wind. There had also been some heavy rainfall in the days prior to my visit, and so the ground was also a quagmire in places and I found myself walking quite a bit and trying to avoid the huge muddy puddles. Finally, there was another hazard that I don’t often encounter when running in East London – wildlife like the wonderful Lundy ponies blocking my way, and then Soay sheep and feral goats that roam the island! 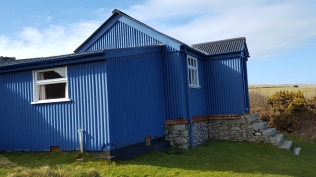 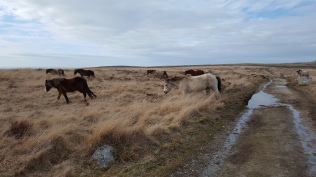 I just stuck to the A1 for my run which was challenging enough for me – I would certainly worry that if I was to run on the Eastern or Western slopes that I would trip and fall. I can’t envisage how they are going to cope with 250 runners on these precipitous tracks, and hope that no damage is caused either to the trails or to runners.

In the end, I only made it out for one run during my stay in March. And during that run I summarised 7 things I had discovered about running on Lundy:

I hope the inaugural Lundy Race is a great success, and wish all the runners the best of luck, particularly to the runners I know who are taking part: Sian, Rachel, Alice and Bex. And you never know, perhaps if it’s run again another year, I may challenge myself to take part if I find out about it in time before it’s all sold out!

1 Response to Running on Lundy Island