Boston parkrun: the one with the podcasters and uber-tourists

When I was invited to spend a weekend in Lincolnshire at the rather splendid Skendleby Hall to celebrate a friend’s birthday, my first thought was “how lovely” and to check that I was free and able to go. But my second thought was “I wonder if there’s a parkrun near there?” A quick check on the tourist tool website and I found out that Boston parkrun was about 40 minutes away by car. I knew very little about Boston, Lincolnshire, other than that the other Boston – the one in the US – was named by a group of Puritans who left Boston, Linconlnshire, for America in the 1630s and founded a settlement in Massachusetts which they then named after their home town. Driving through Boston the connection between the two Bostons is highlighted with road names like the John Adams Way, Pilgrim Road and the hospital being called the Pilgrim Hospital.

Boston would be my 15th different parkrun, and my first beginning with “B” for my alphabet challenge! I’ve also recently discovered the parkrun “Running Challenges” on Google Chrome, which adds different badges to your parkrun profile and sets out a number of quirky challenges. One of these is the “Stayin’ Alive” challenge, for which you have to run at three parkruns beginning with “B” and three beginning with “G” to get the badge – for the BeeGees, geddit?! As I hadn’t run a single parkrun beginning with either B or G before, it gave me another reason to attend!

Before packing to go away for the weekend, I posted a question on a parkrun group on facebook, about whether to pack trail or road shoes, which was answered by the helpful Kerry McCrainor and also by Steve Langford who was doing the first timers’ briefing – thank you both. (The answer was that although it is on a mix of tarmac and trail paths that I guess could get very muddy in winter, it had been so dry over the previous weeks that road shoes were fine.)

The day came and I turned up at the Witham Way Country park ready to run my first Boston parkrun. I was one of 13 first timers there and found myself amongst other tourists from Wimbledon, Bushey, Sheffield, Leeds and Wormwood as well as the locals with a respectable field of 152 runners.  Also present on the same day were some parkrun legends, one of these being uber tourist Louise Ayling who jointly presents the parkrun podcast Free Weekly Timed and who was running her 351st parkrun. Also at Boston on Saturday was another uber tourist, Danny Norman, who, incredibly, was running his 250th different parkrun at Boston, out of a whopping total of 594 parkruns, making my 15 different events seem like very small fry indeed. Danny is also a parkrun podcaster; having previously presented the parkrun show podcast, Danny has now launched another parkrun podcast called With Me Now.  He also  proved to have superb selfie-taking skills with his long arms being a bonus!

But there were also some superb home-grown milestones to celebrate, with Neil Goodwin and Susan Seal both running their 50th, and the amazing Andy Bailey swapping his Run Director’s jacket for a specially adapted hi-viz jacket as he was running his 250th parkrun. Parkrun is so close to Andy’s heart that he even has a parkrun tattoo – I’m pretty sure he never forgets his barcode! #DFYB  Afterwards I worked out that Louise, Danny, Neil, Susan and Andy together have run an incredible 1,295 parkruns or a total of 6,475 km – which is further than the distance between Boston in Lincolnshire and Boston in the USA, a mere 5,223 km!

It was very hot on the day that I attended, and there were lots of little flying bugs around but I had got there early so had some time to spend spraying insect repellent and applying sun cream which I was very glad I had brought. As I did so, I noticed a group of people gathering around a woman who was holding a large board. I went over to investigate, and found that it was a board with the future volunteer roster on it, with spaces for people to sign up to the volunteer role of their choice for the next three weeks. The woman holding it explained that they often had a problem getting volunteers to sign up and found that by the Thursday or Friday before parkrunday they often had no volunteers before they introduced the board, but now they’ve found that people are happy to sign up. This is one of the things I love about touristing; you can see innovations that other parkruns have come up with and take them back to your home parkrun. I guess if you’re a regular parkrunner and you see that there are no volunteers for the next few weeks it gives you a very visible reminder of the need for volunteers, as well as ‘pester-power’ working to full effect! 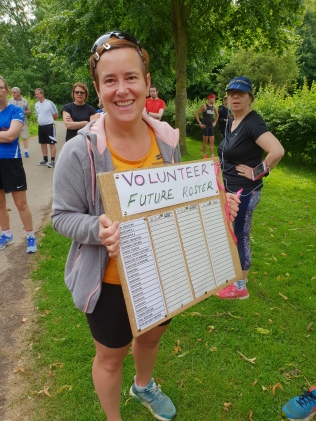 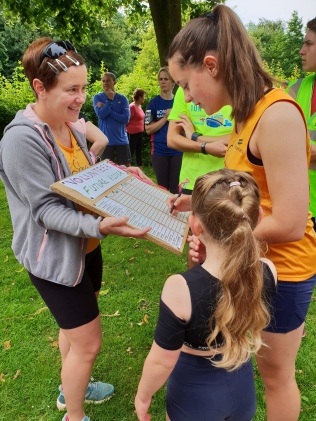 Onto the first-timers’ briefing given by Steve Langford, followed by the main briefing given by Run Director Bob Bailey, and then we were off. The route runs along the towpath of the River Witham, and in the distance at one point you can see the top of the “Boston Stump” – the 272 feet tower of St Botolph’s Church in the centre of Boston.  At places the route was very narrow and quite congested. I didn’t mind that, as it gave me a break – I’m slow and at the back anyway – but I guess if you are a gazelle and chasing fast times it might be annoying. There were also quite a lot of overgrown nettles and brambles along the route making me regret my choice of shorts over longer leggings that would have afforded me some protection against getting scratched or stung. It’s as flat as a pancake though which was a bonus in my book (I hate hills!). There are also times on the route where you can see people ahead of you and behind you as the route loops around, which is another feature I like, especially if you know other people who are running as you can look out for them and give them a wave at the passing places.

At the finish line I noticed there were quite a few kids helping out – always good to see children getting involved and volunteering. And then there was a table laden with goodies to celebrate the milestones and people standing around chatting, with a good atmosphere. All the volunteers were super-friendly and encouraging as well, although I’m not sure how I ended up agreeing to write the run report! 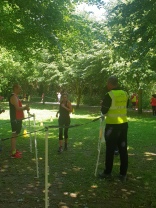 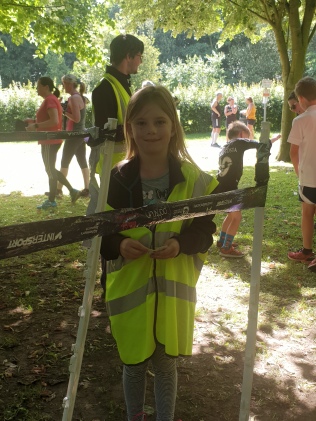 One downside to the event is that they don’t have any toilets in the park, which is a bit of a problem if, like me, you’d had to drive for 40 minutes before getting to the park, before running for another 40 minutes, as well as hanging around time. The website says that there are limited toilets available at Boston Town FC only after the run, but when I asked for direction to these I was told that they didn’t like the parkrunners using them. I was directed instead to a nearby supermarket, which was only about 5 minutes away by car so I guess if you were in the know you could go there beforehand. They also don’t have a café in the park, so the post-parkrun coffee and social takes place a short drive away in the Burton House Brewers Fayre where I guess there are toilets!  I’m not sure how easy the event would be to get to by public transport – the website says that there are no buses that serve the Country Park and the centre of Boston, where there is a train station, is just over a mile away. For those attending by car though, there is plenty of parking.

But these small niggles aside, Boston was a nice parkrun to do; a flat, pleasant scenic route, and lovely volunteers. And it’ll give you one of your BeeGees – altogether now: “Ha..ha..ha..ha..stayin’ alive, stayin’ alive”! #loveparkrun