I wrote the piece below a year ago when the Walthamstow “Mini-Holland” trial was taking place. I was having a drink in my local pub thinking about the introduction of the trial and decided to put my thoughts onto paper. I had a pen and notebook on me and so just sat and wrote what was on my mind, with no particular aim in mind with what I should do with the finished piece. Having written it, I decided to start a blog as a vehicle for this and other ramblings, but after starting up the blog my old computer died a death and the blog didn’t get any further than initial design! But over the last few week s the residential streets around my house are being closed off one by one, as “Mini-Holland” for real is put in place and so I thought it was time to revisit my original post and then update it. So here goes…

I am a reluctant cyclist. I know cycling is good for me, good for the environment, good for everyone. Non-polluting, cheap, helps me get/stay fit – what’s not to like? I used to cycle a lot many years ago, but the bike went into storage when I moved house. A couple of years ago I got it out again and have had sporadic attempts at becoming a cyclist again, inspired by various friends/family, the 2012 Olympics and the Tour de France coming to the UK. And yet…

I should cycle to work, I know I should. My employer provides cycle storage, showers and heated drying room where wet clothes from a rainy ride in can be hung up and dried by the ride home. But whilst it takes me 20 minutes to get to work by car, it takes just over an hour to get there by bike with the route that I take, and an hour and a half to get there by public transport. So on a wet, cold day when I have to be at work by 8am, it’s easy to see which commuting option I would favour. Leave the house at 6.45am or 7.30am? No contest.

I am also put off by all the media hype about the number of cyclists killed in London, and some friends who have recently had horrible injuries from cycling where motorists have opened car doors suddenly or not seen them when turning. Near my house there is a busy main road ending in a huge roundabout at which there have been a number of cycle accidents/fatalities, and so rather than dice with death tackling this, I have worked out a route to work that avoids this although it is considerably longer than using the main roads. This “safe” route takes me along residential streets that are relatively quiet although annoyingly have road humps that are not very cycle-friendly. It also involves a stretch of very pleasant cycling through a park, next to allotments and a riding stable, and where you could easily kid yourself that you are in the countryside not grimy, urban East London. 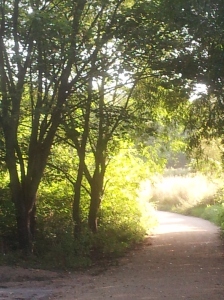 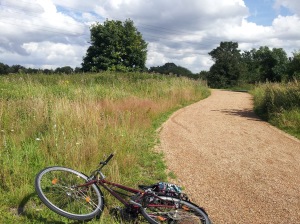 So I cheered when I heard that my Waltham Forest council had won a £30million bid to improve cycling facilities in the borough, and to turn the area into a “Mini-Holland” as the scheme was named. I imagined the schemes to improve cycling in the area I would introduce, such as segregated cycle lanes on the main roads that couldn’t be blocked by parked cars, spaces in the road humps for cycles to ride through rather than over them, and some sort of priority scheme being put in place for the death-trap roundabout. I then found out via a leaflet put through my door that the mini-Holland plans the council had in mind didn’t involve any of these things, but instead was introducing a new traffic scheme starting in the area around my house. The plan involved closing off some streets, altering the traffic flow on other streets making them two-way or one-way, and having some “reclaimed public areas” in which cars would be banned and which would contain flower beds, trees, seating and access for cyclists and pedestrians only. The leaflet also stated that there would be free cycle surgeries and training. It all sounded marvellous – how could anyone object to this? Yet my neighbour told me that she had attended a “consultation” meeting held by the council that I couldn’t attend. She said that the vast majority of people who attended the meeting were violently opposed to the council’s plans, and the meeting was very hostile, which surprised me.

And then the day came that a two-week “Mini-Holland” trial was put in place. Although I had been aware that they were going to have a trial, I had no idea when it was starting or the devastating impact it would have on the community. I went to work as usual in the morning, but found when I returned home that various road blocks had been put in place and I could no longer easily get back into my street. Instead of driving down two short roads from the main road, I had to drive along a huge circular detour, and drive through numerous roads in the “Village” area that I would not have previously gone near. People were standing at junctions handing out leaflets that explained that the aim was to reduce the non-essential non-stopping traffic that was using the Village area as a rat-run to cut a corner between two main roads. This first evening of the trial the traffic queues were horrendous, and it took me around 20 minutes extra to drive through the village to my street, adding about a mile to my journey and forcing me to drive through roads that the scheme was supposed to reducing traffic on.

I thought that maybe the first day maybe just caught a lot of people – like me – out, and that once everyone realised the road-blocks that were in place the teething problems would be ironed out and we would start to enjoy the new pedestrian areas and see the area change. And yet, over a week later, it seems to be complete chaos and I can’t see anything positive about the scheme. With the road blocks in place, any cars wanting to drive through the village area are forced to go down only one or two routes. My road is on one of these only available routes and so whereas before we were a quiet one-way street that didn’t see much traffic at all, now there has been a huge increase in traffic in my road, with tailbacks and queues of cars right along the road. Some of the shopkeepers in roads that have been closed to traffic have tried to take matters into their own hands, and have tried to forcibly remove the temporary road closures as they see a drop in business.

I can’t see how this scheme will increase cycle usage either. I never saw a problem with the “rat runs” in the past as a cyclist; some of the problems that discouraged me from cycling came from the main roads and busy junctions, not the residential streets. Making life difficult for car-drivers will not make them abandon their cars in favour of cycles/walking either. If you want to encourage people to leave their cars at home, try making the main roads safer for cyclists, and provide affordable, better, more frequent public transport options. Forcing all the through-traffic down one or two streets does not seem to be the answer to me, either. Perhaps I suffer from NIMBY-ism, as the scheme has resulted in my road going from quiet residential street to the main thoroughfare. Perhaps I just hate change. Will I come to love “Mini-Holland” when it is introduced for real rather than as a trial? The jury’s out on that one, but watch this space.

This entry was posted in Cycling, Walthamstow and tagged bike, Cycling, Mini-Holland, Walthamstow. Bookmark the permalink.