An evening with William Boyd

I was introduced to William Boyd when my brother suggested I might like to read Any Human Heart. I did, and was blown away. I hate lists of favourites – favourite film, top 10 places to see before you die etc., as I find that if anyone asks me for my favourite anything it tends to be the last one I remember, but I would be hard pressed not to include Any Human Heart in my list of favourite books. I was reluctant to read any more Boyd after this as I was afraid that it wouldn’t be as good and I would surely be disappointed. But then An Ice Cream War was chosen for my book group so I had to read another, and although it did not have the same impact on me as AHH, I did thoroughly enjoy it. So when a friend asked if I would like to go with her to see William Boyd in conversation, I jumped at the chance.

The evening was one of a series of evenings for Guardian members, called Guardian Live. I have to admit feeling a bit sorry for William Boyd before the evening started; not only do authors have to write books and attend book signings, but increasingly they have to take part in literary festivals and go on stage and talk about their work, with the additional pressure of having to be witty and interesting without a script. There’s something about the writer’s life – sitting at a desk all day in a very solitary existence – that makes me think it would to appeal to introverts, and not extroverts who would enjoy being showmen and getting up on stage in front of lights and an audience and having to perform on demand. The event was at The Tabernacle in West London, in a room set up in theatre-style, with two lonely chairs on stage beneath a huge digital display board, and I imagined anyone being quite daunted to come out to face a packed house. But if William Boyd was nervous or daunted, he certainly didn’t show it, and instead appeared to be confident and at ease.

The evening was structured in conversational style, with interviewer Alex Clark (@AlexClark3) cracking the ice by suggesting that in preparation for tonight’s talk, she was advised not to google the name of Boyd’s new book, Sweet Caress, plus the word ‘photographs’ (the subject matter)! Boyd then read the prologue to the book, before discussing the themes of the book – and his work in general – in conversation, followed by another portion of the book being read out and the evening finished with a Q&A session.

One of the features of Boyd’s work is that he likes to write “whole life novels” – where you follow the central character from very early age through to death. I remember feeling upset and sad when Logan Mountstuart, the main character in AHH, died even though I realised it was inevitable. Boyd said that he also feels almost a bereavement when his whole life characters die, and he remembered coming into the kitchen after writing of Logan Mountstuart’s death and saying “He’s gone” to his wife, as though he had heard the news of an aging uncle’s death. Even though he plans his novels and knows exactly what is going to happen to his characters, the act of actually writing out about their deaths is still emotional to him.

One of the advantages of whole life novels for Boyd is that the characters then live across several decades, which allows him to explore different periods of history. Again, in Any Human Heart, Mountstuart meets various characters that were pivotal in their historic period in real life. But Clark also suggested that another theme that he likes to explore in his work is that of artifice, and he talked for a while of creating a character of an artist called Nat Tate. For a period of about a week he managed – with various co-conspirators such as David Bowie – to convince the world that Nat Tate actually existed. Bowie hosted a party in New York at which he declared that he possessed a “Tate” and various people then agreed that they had seen Tate’s work at exhibitions. Whilst listening to this I started thinking about the various characters Mountstuart met and wondering if, amongst the various real characters such as Hemingway and Virginia Woolf, he had introduced a few fictitious ones that had duped me – and other readers – into believing that they were real historical figures that I just hadn’t heard of. One of the subsequent questions from the audience asked him about such a character – an artist who made his work out of farm implements – and asked Boyd if he was real or made-up; Boyd appeared to struggle to remember this character and then said that he was probably made-up.

His new book, Sweet Caress, is another whole life novel, but the central character this time is a woman, the strangely named Amory Clay. Amory is a photographer, and yet again the novel takes the reader through decades of history. The book contains over 70 photographs that have supposedly been taken by Amory; again another use of artifice that makes the reader question whether Amory really existed. Boyd spent some considerable time finding these photographs which are all by “anonymous” photographers, searching them out on ebay and other auction sites. He found it fascinating that some photos would sell for a few pounds, whereas others would be much sought-after and sell for several hundreds of pounds, without him being able to really see what made one photo by an anonymous photographer worth more than another. He mused on the idea that photographs appear to stop time and are thus unique – for the photograph of a car standing in the desert in North America, the moment itself has been captured and will never exist again, making the picture unique. It is also interesting that we all now have the means to take photographs at any moment in time, with the rise of sophisticated cameras contained within mobile phones. Boyd suggested that with this, it comes down to luck – the luck of being in the right place at the right time, and is not necessarily down to talent in the same way as other art forms – he said that whilst not everyone can write a symphony, or paint a picture or sculpt a sculpture, everyone can take an award-winning photograph given the right conditions. I wonder how many photographers in the audience would agree with this.

In Sweet Caress, he is writing as a woman, and this led to an interesting discussion about whether men could successfully write as a woman. Boyd said that when he first wrote for a female character, he first of all tried asking his wife about 100 questions to see if he could fathom out how a woman would think! But he soon realised this wasn’t going to work. He said that the only way it was possible was rather than thinking “what would a woman think about x or y”, he had to think “what would Amory think about x or y” and that it was about getting into the head of the character as a person rather than as a woman that allowed him to do this. I’m not sure what I think of this; but as I haven’t read the book I’m not really sure I can judge how successful he has been in writing a female character.

In the Q&A session he was asked about the craft of writing; how he constructed a novel. He takes about three years to write a book; he first has an idea of the central character and then he spends around two years ‘plotting’ the book in which he works out everything that happens to the character. He then spends around a year writing, which he does longhand using paper and pen. He suggested that no-one under the age of 40 writes like this anymore; everyone uses a computer, and as a result in 40 years’ time manuscripts like his, complete with crossings out, will not exist. This led me to think about the change not only in writing books, but in reading them too. Some years ago I bought a Kindle – reluctantly as I love having a paper book to hold and couldn’t see how I would get the same enjoyment from an electronic screen. I have fallen in love with my Kindle, and now wouldn’t be without it, but there are times when it is better to have a physical book – such as when there are a lot of footnotes or illustrations, or when it requires the reader to look back to see chapter names etc. I think that Sweet Caress will be one of those occasions; with over 70 black and white photographs in that illustrate the novel, the experience will be better if not read electronically where you cannot easily flick back through the pages to see the photograph being mentioned.

Unfortunately, there was no time for my question at the end. I was intrigued that Boyd said that he plotted and wrote the novel Sweet Caress first before ‘finding’ the photographs to include in the book that illustrated the story. As these photographs are all real, I wondered how much he had to go back and re-write sections of the book to fit the photographs, or if he just took longer trying to find the perfect photograph to fit his story. I guess we shall never know.

After 90 minutes of conversation the evening drew to a close. My impressions of William Boyd was that he is a charming, interesting and intelligent man, and not as introverted as I thought an author would be. And yes, I must now buy Sweet Caress and read it! 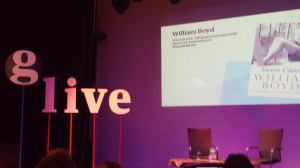 This entry was posted in Books and tagged Guardian, WilliamBoyd. Bookmark the permalink.