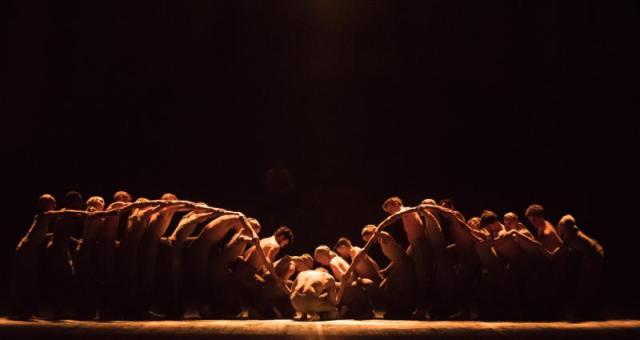 Last night I was fortunate enough to catch the last performance at Sadlers’ Wells of Lest We Forget, an evening of dance to commemorate the First World War and danced beautifully by English National Ballet (@enballet). Over the last year there have been many performances, books and special commissions to mark the centenary of the First World War, ranging from concert performances, recordings of music inspired by the Great War, anthologies of the First World War poets, through to the fantastic sea of poppies cascading from the walls of the Tower of London and now at the Yorkshire Sculpture Gallery. I have been to several of these concerts, and performed in some myself, but this is the first time that I have seen the centenary marked through the medium of dance. When I mentioned to a friend that I was going to see this performance, he laughed out loud and mimed a comic interpretive dance with soldiers in the trenches dodging bullets and falling down dead. So I went with some trepidation, hoping that something so horrific and heart-wrenching would not be made ridiculous by translating it into dance. I needn’t have worried; the evening was thought-provoking and I found it impossible to describe without using adjectives such as haunting, beautiful, reflective and poignant.

Lest We Forget is made up of three pieces by different choreographers, with each piece building on the others and combining so that the whole evening was greater than the sum of its parts. All three were beautifully lit by Paul Keogan, Michael Hulls and Fabiana Piccioli in turn – I mention all three as so often the people who light a performance are the unsung heroes. They don’t take a curtain call, and their names are not feted in the same way as the choreographer, and yet the lighting can make or break a dance. At times the dancers were lit so that they appeared as ghosts, at other times the lighting was stark and unforgiving emphasising the harsh reality of war. Sometimes you barely noticed the lighting and at others it took an integral role such as to mark the walkways and paths the dancers took or to mimic searchlights.

The evening started with No Man’s Land by Liam Scarlett, a piece that was more classical in form than the other two more contemporary pieces. This was an excellent piece to set the scene and the tone for the programme. The staging was particularly effective with a grimy munitions factory with broken windows, and long walkways and steps along which the soldiers had to trudge whilst the women working in the factory released clouds of dust that were a premonition of the final piece in the programme. The costumes were equally effective at setting the scene, with khaki/brown uniforms and tin hats for the soldiers and dreary, grey, utilitarian dresses for the women at the start then brilliant blue dresses to celebrate the homecoming from war of their soldier beaus. And home they all came to joyous reunions, all except for one dead soldier, whose ghost was left to dance the final duet with the woman he left behind. The majority of the work was set to Liszt’s piano music which was orchestrated by Gavin Sutherland and played live. However, the final duet was danced to the very musical solo piano playing of Julia Richter. And as the orchestra fell silent and the music was pared down to the solo piano it made the final duet seem more intimate and moving, as the ghost quietly danced with his heart-broken sweetheart.

There were times when some of the female dancers sat on the steps on the stage appearing to be detached and uninvolved in the dance, and I felt slightly the same – detached and uninvolved. Although it was all beautifully performed, it was too classical for me, and the ballerinas twirling on their pointes left me a little cold. I could admire it but it didn’t move me in the same way it moved others in the audience.

The more contemporary Second Breath by Russell Maliphant was far more my cup of tea, with contemporary dance set to an exciting electronic rhythmic soundtrack that pulsated with life. The title was apt, as it was breathtaking and dazzling with virtuosic dancing that found me holding my own breath at times. The soundtrack included a recording taking from the Imperial War Museum Archive of a reading of Do Not Go Gentle Into That Good Night by Dylan Thomas, that was hauntingly poignant.

The showstopper and real star of the night though was Akram Khan’s award-winning Dust which closed the programme. The title echoed the “ashes to ashes, dust to dust” litany said at funerals, and at the start a row of solemn, dimly-lit, ghostly figures clapped their hands to release clouds of dust as thought their bodies were disintegrating into dust before our eyes. A writhing, pain-wracked bare-chested dancer was the visceral embodiment of a dying man, at times held up and then struck down by a multi-armed monster. This central character spent some time sitting on top of a trench wall that other soldiers had fallen over, perhaps having already died. The women left behind in this piece were strong and powerful rather than the downtrodden exhausted women in the first piece.

The whole effect was enhanced by the wonderful score by Jocelyn Pook, which mixed live music from the orchestra with an electronic soundtrack featuring foreboding drum beats, the haunting and very beautiful singing of counter tenor Jonathan Peter Kenny and voices from beyond the grave with a recording made in 1916 of With Our Boys At The Front narrated by Sergeant E. Dwyer, V.C., 1st Bn. The East Surrey Regiment. These disparate elements combined perfectly and effectively to increase the atmosphere and I found myself sobbing throughout the work, and especially in the very moving final duet.

Although the run at Sadlers’ Wells has finished, Lest We Forget is on in Milton Keynes in October, and Manchester in November. Go and see it if you possibly can, but be prepared to feel emotional for some long time after the evening has finished.

Trailer for Lest We Forget

ENB – Lest We Forget