Having booked to walk the Inca Trail with a friend later in the year, I was looking to spend a few weekends training for the uneven steps and long periods of uphill that I’m going to experience in Peru. Yes, I could spend hours on the stairmaster at the gym, but where’s the fun in that? I mentioned this to my brother who lives in Yorkshire, and he suggested walking the Yorkshire 3 Peaks as a good training session. I put google to good use and found out the Y3P are Pen-y-ghent, Whernside and Ingleborough, which are all situated in the Yorkshire Dales near the picturesque village of Horton-in-Ribblesdale.

There is a challenge – which many people undertake, sometimes for charity – of tackling all three peaks in one go in less than 12 hours. As this challenge involves just slightly short of a marathon distance (24 miles) and a lot more up and down, this seemed a bit tough for a novice walker without doing a lot of training first. But I thought that doing one peak a day over a bank holiday weekend would surely be possible. I took to twitter for advice, and initially regretted it as the first response I got was from someone asking me why I wasn’t doing them all in one go, making me think that I would be spending a weekend surrounded by hardened yompers who would pour scorn on me for doing a measly one peak a day. But then I got a response from the Yorkshire Dales National Park Authority who suggested that I bought their official Y3P app. This app turned out to be a godsend; it had the routes clearly laid out for each of the three peaks, with maps frontloaded so that they were available even when there was no phone signal (which turned out to be virtually the whole area!), and lots of practical tips and advice. And money from the sale of the app goes towards maintaining the paths on the 3 peaks so I was happy to contribute.

Horton-in-Ribblesdale seemed the obvious place to stay with options ranging from camping and bunk houses through to boutique B&Bs.  We chose Horton Villa B&B and am very glad that we did as not only was it supremely comfortable with a top-notch breakfast, but it also had a hot tub which proved to be a godsend! We hadn’t realised this when I booked so hadn’t brought swimming things, but after the first day of walking I was so grateful for the hot tub to ease my aching muscles that we went in wearing t-shirt and shorts and it was absolute bliss! Amos who runs the B&B is a keen walker and what he didn’t know about the Y3P you could write on a pinhead. He lent us walking poles, made us up a packed lunch to take with us each day, photocopied the route map for us and correctly anticipated the time it would take us to walk each peak.

Most people do the Y3P in an anticlockwise direction starting with Pen-y-ghent, which many feel is the easiest although it is more straight-up-straight down than the others. Because we were getting the train back to London in the afternoon of day 3 we decided to save this one for last in the hope we could do it in a morning, and on the advice of Amos who assured us that we could! We decided to tackle Ingleborough first; many people rate this as the hardest so we thought we’d get it out of the way first.

Refreshed after a good night’s sleep and an excellent breakfast to set us up for the day, we were all ready to tackle our first peak of Ingleborough. The app had a circular 10-mile route that started and finished from the car park in nearby Clapham, but as we had no car we took the route that leads from behind Horton station and goes in a virtually straight line all the way to the summit and back. I followed Amos’ advice to “be bold, start cold” and set off in a t-shirt, but the weather was really nice and I didn’t need to put on warmer layer until stopping on the summit to have lunch. Because most people doing the challenge do Ingleborough last there were relatively few people doing this route, so it came as a surprise when we got to the summit to find there were many people on the summit who had arrived from other routes. The route we took is relatively gentle with just a short very steep bit at the end that requires a bit of scrambling. It took us about 6 hours in total – we took it easy with various breaks when needed – but I have to admit I had very achy muscles as we came back and was extremely glad of a long soak in the hot tub to ease the aches and pains! 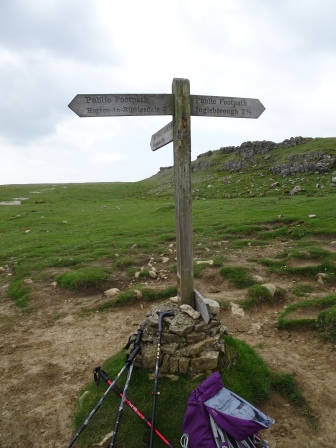 Day 2, and with aching muscles we set off to tackle Whernside. Anne from the B&B kindly gave us a lift over to the start at Ribblehead, and we did the 7.5 mile circular walk described on the app.  This route starts near the impressive Ribblehead viaduct and runs alongside the railway line before crossing the railway and starting the long gradual climb up the peak. At the top there is a lovely long ridge with spectacular views of Ingleborough and the Ribble valley. After a short lunch stop at the summit there is a steep descent followed by a final flat section to finish underneath the Ribblehead viaduct again. As we were descending we saw the train cross the viaduct and wondered if the next train would be in an hour’s time, having not looked up the train times in advance but thinking that it would be perfect if it was. The train times are displayed in the Station Inn; with the pub itself being a sight for the sore eyes of walkers with sore legs, but it was only then that we found out there were only 4 trains on a Sunday and the next one was not due for several hours. Normally I would have been happy to stay in the pub and have a few drinks to aid recovery, but I had some friends who I had not seen for ages turning up at Horton only an hour later and I had no way of getting in touch with them. So the pub kindly rang for a taxi and we found a couple in the pub who also needed to get back to Horton who were willing to share the extortionate cost with us. With hindsight it would have been better doing Whernside on the Saturday when there were more trains, or at the very least looking up the train times beforehand!  However, we were blessed with gorgeous weather on the Sunday – the nicest of the weekend – that resulted in me getting sun-burnt ears despite liberally applying the Factor 50! 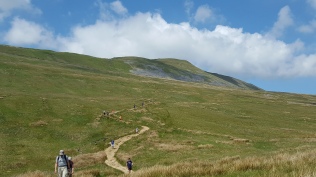 We saved the supposed “easiest” peak ’til last – Pen-y-ghent. Pen-y-ghent is right behind the village but there is a circular walk that was pretty much straight up once side and down the other side with a short ridge at the top. Unlike the day before the day was misty and cloudy, so when we reached the summit we saw absolutely nothing of the view! There is a steep scrambling section just before the summit so in some respects it was a good job we couldn’t see over the edge or our nerve may have left us! It took us 2 hours to get up to the summit – as opposed to the 40 minutes it took a runner who asked me to take his photo at the top!

We celebrated having successfully completed all 3 peaks with a well-earned drink and Sunday lunch in the pub before getting the train back to London. It was tough and certainly was a challenge even though we did them spread over 3 days – I don’t know how people manage to do them in one day! But they are certainly achievable and enjoyable, even as a novice walker, and it was so refreshing to get out of London and up into the Dales – brilliant stress-release – and I would recommend them to any keen or even novice walker.