Last year I was delighted to be able to banish the winter blues, albeit temporarily, with a visit to Lumiere London. This light festival saw buildings in Central London used as a canvas for enormous illuminated projections that lit up the cold night skies. I wrote about it in my blog here: lumiere London. The festival proved hugely popular, with thousands of people taking to the streets to see the illuminations; however this popularity was also its downfall, as the hoards of people thronging the streets caused huge traffic and pedestrian chaos, showing that Central London was not really the ideal venue for such a festival.

I hoped that Lumiere London would return to the city again this year, although I feared it would not due to the problems mentioned above. So I was thrilled to see that another light festival was taking place in 2017, this time in the spacious grounds of Chiswick House where there was room for large crowds to visit the festival. This Magical Lantern Festival had already been held before Christmas in Birmingham and Leeds, at the same time, before coming to London to mark the celebration of the Chinese New Year. The scale of the London festival was huge, I wondered if it was an amalgamation of the Birmingham and Leeds festivals or if they had two of each installation. I found out from their website that the festival was actually conceived in October 2015, and shown for the first time last year in Chiswick House, where it was visited by 110,000 people.

I also learned from their website that “Chinese Lantern Festivals span a rich 2000-year heritage. As early as the Western Han Dynasty (206 BC-AD 25), it had become a festival of great significance. During the Lantern Festival, children go out at night to temples carrying paper lanterns and solve riddles on the lanterns. During the Tang Dynasty (618 AD), the tradition grew, lanterns were not only put up everywhere in the palace and along the streets, but were also used to build big festival lantern wheels, buildings and even trees.

In ancient times, the lanterns were fairly simple, only the emperor and noblemen had large ornate ones. In modern times, lanterns have developed greatly and have become works of art embellished with many complex designs. Lanterns symbolize people letting go of their past selves and entering new ones, which they will let go of the following year. The lanterns were almost always red to symbolize good fortune.”

I visited the Magical Lantern Festival on Saturday 4 February, and it certainly was magical! It was also extremely popular, perhaps because it was a Saturday night and maybe on week nights it is not so busy. On arrival, there is a grand entrance and then illuminations all along a walkway before you get to the point at which you have to show your ticket. At this point my heart sank as there was an enormous queue to get past the ticket checkpoint. However, although there was a long queue here, and for the café and bar immediately through the entrance, once you actually got into the festival although it was busy it was not so packed that you couldn’t enjoy it. The installations were also so huge that you could always get a good view and find the space to get a clear sightline to take photos.

The lanterns are displayed in tableaux, with different themes that were quite abstract. There were some illuminated display boards that explained the themes although with some quite interesting translations from the Chinese language that appeared first on the boards! The themes ranged from the story of Aladdin, depictions of Paris, London and the ‘Mediterranean’, through to Chinese temples and a celebration of Chinese cookery with a giant noodle bowl and bottle of soy sauce – although this display also featured a chef making pizza which seemed a little incongruous!  There is only one way around the festival, the route snaking around so that you pass every display. At the end of the route is an ‘entertainment area’ where there is a fairground wheel, skating, an ice bar and various concession stands where you can buy food and drink.

No words do the festival justice though, and even the photos do not really convey the sheer size and scale of the lanterns. I would thoroughly recommend going to see it if you get the chance; and I hope it returns next year for a third year running. 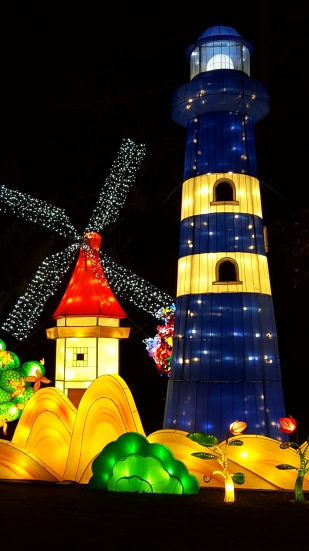 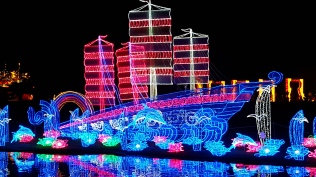 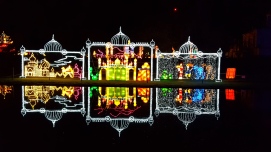 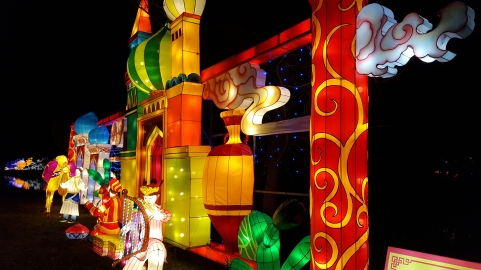 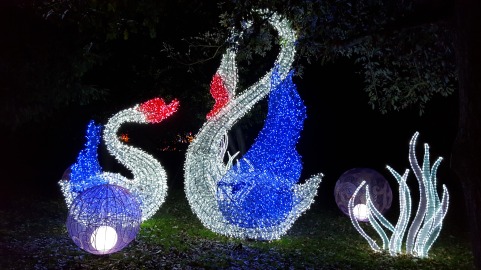 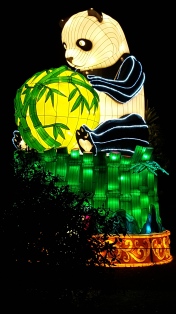 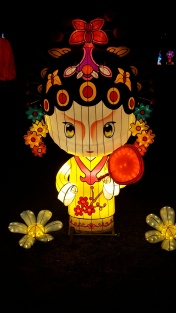 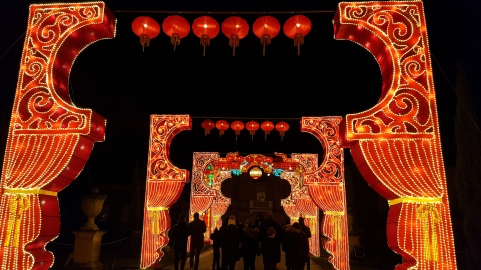